Okay, I got the “raspberries” from my Mother-in-Law about the log being too long.  I can’t help it.  First of all, it takes me so long to sit down and write that once I get rolling I don’t wanna stop.  Second, I get the “But what else did you do?” from others.   P.T Barnum said it.  Well, sorta.  Please insert the word “please” for the word “fool” in that (in)famous quote.

I so miss family Thanksgivings.  I don’t give a rip where we are.  In my mind, nothing compares to being surrounded by our family.  We “Facetimed” with Suzanne’s Mom and sister, then with our kids.  The tradition on our side is a shot and a beer at 12h00 sharp, followed by the Detroit Lions game, followed by dinner.  So…we got the shotandabeer with the kids.  The tradition goes back to my maternal grandfather (unarguably my favorite ancestor), who usually waited for about 5 minutes after arriving at our house before asking “What the Hell does a guy need to do to get a beer around here?”  We enjoyed Thanksgiving dinner with Britt, Sandy and a half dozen other pals at “The Cosmic Crab” restaurant.  Owned by Steve and Joan Crabtree, the dining area is an open-sided affair built on stilts over the water.  Just saying that dinner was a buffet does not do it justice.  Joan is an excellent cook, and all of the many dishes were traditional and homemade. 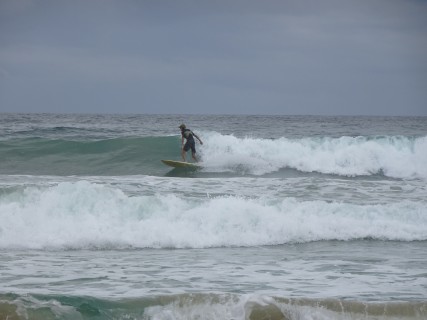 We spent the next week or so hanging with Britt and Sandy.  We followed them out to Isla Bastimentos, anchoring in the harbor at Old Bank.  We hiked over the island.  A slippery, muddy trek and the only way (except by boat) to Wizard beach, it took us around 30 minutes.  Suz and I hung out for awhile and watched the surfers, including Britt.  Swimming from shore was out-way too much surf and rip currents.  On the way back to the Girl, we diverted to another path which led to a small hostel perched on the spine of the island amidst the rain forest.  Along the way, we encountered a bunch of what appeared to be Brahma-type cattle, including a few bulls straddling the path.  There wasn’t any way around them, as the path ran along the top of a ridge, so we cautiously threaded our way through them.  Suzanne didn’t seem fazed, but the words “How did your Mom and Dad die?” kept running through my head like a broken record.  (It seems like I hear that one a lot).  Anyway, all’s well that ends well.  We had a fruit juice at “Up the Hill” before heading down to the harbor.  No cars or motorized vehicles or roads in Old Bank, this village of 1,500 souls.  That evening, Suz and I borrowed “Whimsy”, Britt and Sandy’s sailing dinghy and took a sunset sail in the harbor. 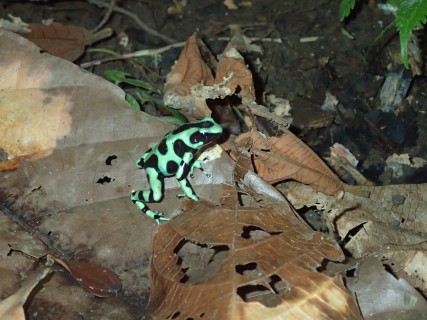 Over the next few days, we hung out with Britt and Sandy, revisiting spots that Suz and I had visited earlier and I have already reported on.  Sandy’s cousin would be visiting in a few weeks, so we wanted to show them some fun spots to show him during his stay.  Suz had heard about a property in Palos Bay that had been donated to the Smithsonian after the owner had passed away which had some good hiking trails on it.  Britt, Sandy, Suz and I dinghied over from Rana to see what was what, and enjoyed some good hiking complete with sightings of some Blue/Green Poison Dart frogs, Howler Monkeys, awesome butterflies, and the usual assortment of tropical flowers and fruits. 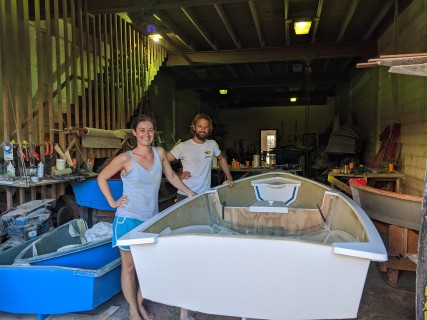 Suz and I had a trip planned to travel to Boquete up in the mountains, so we needed to leave the Girl in a secure spot.  To this end, we reserved a slip at the Red Frog Marina on Isla Bastimentos.  Before we parted with Britt and Sandy, they took us in to Bocas Town and introduced us to Graham and Meghan, a pair of South African cruisers.  They have a small shop outside of town where they built “Whimsy” for Britt and Sandy.  Let’s just say that in January there’ll be another boat on our boat and leave it at that.  So far, we’re thinking “Puff” or “Zephyr”.

Okay, just one more thing.  You’ve probably been sitting on the edge of your seat since the Post-Thanksgiving Bee Massacre of 2019.  (Arlo Guthrie, there may be a song in here).  My two bee experts have answered my emails.  #1.  Neither have seen anything quite like it.  #2.  Both have suggested exposure to some type of neurotoxin (most likely pesticide).  That’s it.  Neither can answer “Why our boat?”  “Why were their abdomens adhered to the deck?”  “Why so far from any large-scale agriculture?”  In other words, I think that this weirdness will remain a mystery until I pursue it further (in my spare time).  Not likely.  This may fall into the category of “Stuff happens”.

We’re at Red Frog.  It deserves a little more ink, so let’s do that later.  In the meantime, we’re psyched about hitting the road to Boquete tomorrow.