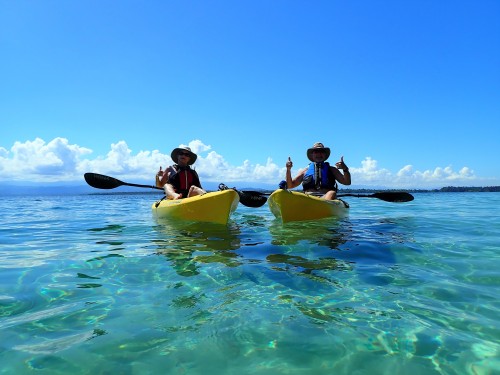 Yahoo! Just coming off nearly 5 days of sunshine-no more whining for a while.  We left Judy and Rick’s place under cloudy skies and 20 knot winds.  One more trip to the “snorkel spot” on the mushroom island, then it was off to our new anchorage.  The aerial pictures of Johnson’s Cay looked like it was taken of an atoll in the south Pacific.  An anchorage surrounded by reef and two small islands. What a perfect place to anchorsnorkelchill.  We crept through the reef, the wind was still blowing pretty good out of the North, sending fingers of spume over the slate-gray water and through our proposed home.  VERY much less than scenic.  Nope.  The Gallegos Cays, a group of around 14 small unnamed islands lay around 5 miles to the north.  It appeared to have a few cuts in the lee of the islets that might give us a nice calm anchorage.  We tucked in a narrow channel between three Mangrove mounds.  The water was calm but we had a really nice breeze.  In the morning, we woke to sunny skies and calm winds.  What a perfect day for snorkeling.  We dropped “White Star” over the side and cruised some promising spots in and around the islets.  Nothing looked really promising but we had a nice ride under sunny blue skies with a cuppa Joe in hand.  What a perfect day to cruise over to Crawl Cay on the Girl. 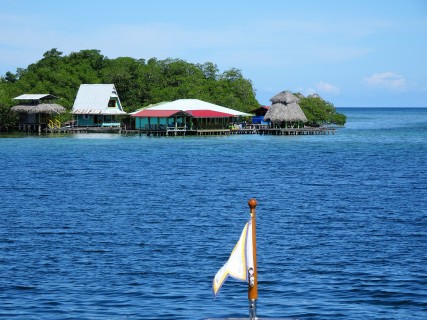 Crawl Cay lies just south of Isla Bastimentos, and is on the southern route that we forwent in favor of the safer northern route when we went from the Zapatillas to Bocas Town.  The charts and satellite pictures show the track to be littered with shallow reefs and bars.  With the sun high, it seemed like the perfect day to head to this picturesque spot.  Okay…so I’ve told you that the charts of the province are notoriously bad.  We have 3 chart sources up on our navigation devices.  The PC is running C Map charts.  The Ipad is running Navionics.  The Furuno is running its proprietary program.  As we’re slowly rolling the 5 miles into Crawl Cay, the plotters are showing that we’re in anywhere from 1’ to 40’ of depth, while our actual readings are quite often very different.  It’s a good thing that we can see out the window, gauging depth from color.  Hilarious!  Well, we got in without scrapes and bumps, and now we have a course for future reference.  Shallowest depth 15’, although straying even 20’ in either direction could put you on the reef.  (We’ve already shared latitude/longitude of waypoints from our other courses with friends on different boats.)  The pangas raced to and fro for most of the afternoon, ferrying touristas from Bocas Town, snorkeling and enjoying the Bahamian blue water.  We dropped in the water after the crowds left, and found about what we expected-largely dead coral and not that many critters.  Dinghy riding over to the windward side of the island did not reveal much better.  All in all, Crawl Cay was a pretty anchorage and not much else.

Bocas has a very active cruisers/expats “net” which broadcasts on the VHF every morning at 07h45.  Channel 68 is monitored at all hours, but for around 20 minutes or so every morning, anyone can tune in to a moderated broadcast.  The format is as follows:  general check in, community announcements, weather report, boat (and house) problems/solutions, buy, sell & trade, general announcements trivia questions jokes etc.  Our friends, Brit and Sandy had been checking in for around a week, so we knew that they were back from California, but we had not been in contact with them yet.  We didn’t want to bother them.  You KNOW how much work there is to do when you come back to a boat that’s been standing idle for a few months.  Well……they reached out to us the morning of our second day at Crawl Cay.  They were done working and were ready to play.  No winds yet, so surfing was out (Oh yeah-stereotyped Californians).  By the way, if I hadn’t mentioned it already, Bocas is well-known in the surfing community for its’ great waves during the season.  Anyway, we told them that in light of the great weather forecast, we were heading to Starfish Beach (Playa Estrella) on the north end of Isla Colon after reprovisioning at Bocas Town.  Dave and Shelley also planned to meet us there on Friday.  We’d meet them at Bocas Town and cruise up to Starfish together.  We cruised down to BT and dropped the hook in the South anchorage near Halcyon (Brit & Sandy).  After a quick “hello,” Suz and I headed to town to shop.  Besides the usual, I needed to get some epoxy resin hardener so that I could fix a leak in our pilothouse roof (more on that later).  We weren’t on shore more than an hour-and-a-half.  When we returned to the Girl, it was standard operating procedure.  I dropped Suz and the supplies off at the stern, then hooked the bridle up to the dinghy while she went up to the boat deck to bring “White Star” aboard. 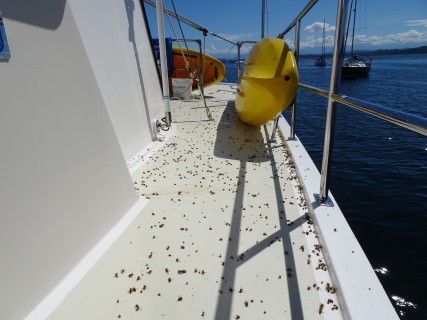 There were a couple of handfuls of (what appeared to be) dead honeybees on the sole of the cockpit-kinda weird.  Suz reappeared immediately from the boat deck.  “OMG! You’re not going to believe this.  There are tons of dead and living bees all over the deck up there!”  “Wear your shoes when you come up.”  Suz isn’t prone to hyperbole, but yeah, right.  We got the dinghy hooked to the crane, and I moved up to my position on the boat deck with Suzanne.  Holy cripe.  There weren’t hands full of bees on the deck, there were hundreds.  Maybe a couple thousand.  There weren’t many flying.  Most were either adhered to the deck by their abdomen, or crawling around in their death throes after separating their thorax from their abdomen.  Probably not the craziest thing I’ve ever seen, but definitely in the top ten.  I spent the 2-hour cruise to Starfish scrubbing dead bees off the decks.  Since then, I’ve reached out to a couple of bee doctors (PhD types) to try to find out what this bizarre behavior was all about.  My guy from Cornell has already gotten back to me without a reasonable explanation.  I’m waiting on a response from the other one.  I’ll keep you posted. 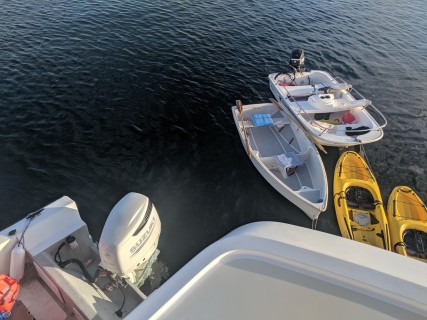 By the way, we spent 4 days at Starfish beach, a couple of them with Britt and Sandy.  SB is a really pretty beach on the north end of Isla Colon, and is super popular with tourists and locals alike.  The water taxis run nonstop into this (inaccessible by road) beach.  The shore is lined with shacks serving food, drinks and selling the obligatory niknaks.  Thursday (the 21st) and Friday were pretty quiet.  Shelley and Dave came up on Friday, and we all enjoyed some conversation and sips.  I’m sure that you remember that bunch of bananas.  Well, even after giving some away, we were left with forty or so, all ripening at the same time.  Necessity is the mother of invention.  Water of one coconut, 3 bananas, 8 cubes of ice, 4 oz. dark rum.  Blend until smoooooooth.  Top with grated nutmeg.  Makes 2 drinks.  Good, and soooo good for you!  Well…maybe not the rum so much.  Haven’t come up with a name for these little treats yet, but let me say that we went through 27 bananas. 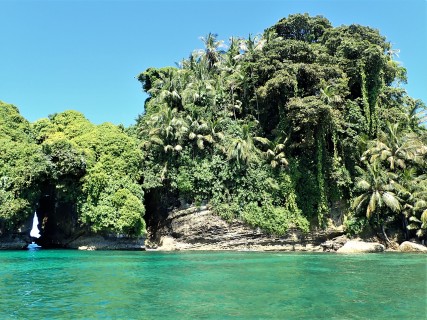 In the time that we were there, B & S, Suz and I took a 10-mile (each way) dinghy ride out to Swan Island, a.k.a. Bird Island.  It’s nothing more than a sheer rock rising directly out of the sea.  Palms, White Mangroves and other unidentified trees hold onto cracks and fissures in the rock for dear life.  The attraction is the birds.  Nesting in holes in the rock face are colonies of Boobies, Frigate Birds, and White Tropic birds.  The snorkeling on the leeward side of the island wasn’t bad, either.

The kayaks gave us an opportunity to get away from the beach on the busy weekend.  A 6-mile paddle on Saturday took us to an uninhabited Mangrove-lined bay to the south, while our 10-mile paddle to the north took us to the headland of the island.  I should qualify what I mean by “busy.”  The visitors start coming in by water taxi a bit after noon and leave at five, when the beach closes.  It’s off-season still, so less than 25% of the beach chairs ringing the shore were occupied.  Sooo…not really crowded, but compared to some of the completely uninhabited anchorages we’ve enjoyed, “busy.”  Walking the beach in the early morning was a joy, and we went in on the kayaks for lunch-very good tacos and icy cold beer. 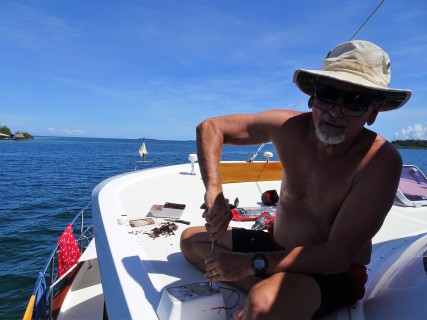 Well….I dropped one shoe, here’s the other.  For a week or so, I had been cleaning up a “tea stained” dribble under the eyebrow outside the pilothouse on the port side.  I had a pretty good idea where it was coming from, guessing that the trim strip covered a joint between the mold for the roof and wall.  If that was the case, water was accumulating above the ceiling in the pilothouse and finding its’ way out under the teak molding, imparting the brown color.  Training from my former life quite often kicks in, or is it denial of the inevitable?  I’m referring to “Give it some time to heal before intervening.”  The boat never heals, but I can avoid a nasty job for a while.  I just don’t sleep at night.  But….I digress.  The issue came to a head after a particularly hard, wind-driven rain.  My rationale for ignoring the problem (it’s not coming inside) was blown out of the water, so to speak.  As water streamed out of the overhead wire chase, I knew it was time to face the music.  There was only one place that water could be entering.  The name boards on top of the pilothouse are screwed into the roof, and the wires for the navigation lights pierce the deck as well.  We had sunny days, and I couldn’t face the prospect of “all play and no work,” so I took the boards off, and yanked on the fiberglass stanchions supporting them.  With a sickening “slurp”, one popped off, revealing a totally rotted wood core.  The other one?  Not so easy.  Razor knife and crowbar, 1.  Stanchion, 0.  Even tho’ it was firmly adhered with 5200 (super-strong adhesive), I knew that it would fail in the future.  The holes for the screws affixing the stanchions to the deck, and the boards to the stanchions were not finished out properly.  This requires drilling a hole much larger that the screw, filling it with resin, then redrilling and placing the screw so that it is completely surrounded by resin.  That way, when water finds its’ way down the screw (and it always does, sooner or later), it just contacts the impermeable resin, not rot-able(?) wood core.  Long story short, I drilled out the holes, reamed out the rotten core, filled with epoxy resin.  This several days project was not without pitfalls and aggravation, punctuated by oaths and epithets, but I’ll spare you the details.  Let me just add that, thanks to the Admiral, I found a new use for tampons.  The board on the starboard side isn’t leaking….yet.  As soon as I can find some more epoxy, I’ll see what lurks under that one.  By the way, in true dramatic fashion, the clouds were rolling in as I made my last pour of epoxy, and it cured about an hour before the skies opened up last night.

This morning, the 25th, we left Starfish and explored an anchorage below Conch Point before settling in uninhabited Big Bight, near the southwest corner of Isla Colon.  It is very peaceful here amongst the mangroves, playful dolphins and howler monkeys. We think that we’ll head over to Isla Bastimentos and find some interweb access tomorrow or the next day.  Until then,